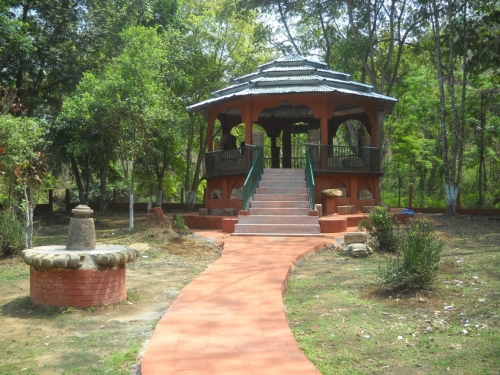 Remains of about   three  temple   exist  at  Akashiganga Archaeological Site.  Akashiganga  is a rocky  spot  on a  stream surrounded by forests.  The beauty of  the site is enhanced by  a waterfall locally called Akashiganga and this waterfalls serves as a natural picturesque background for the temple ruins.  A  large  section of  the  stone temple remains have been shifted to an archaeological park and a site gallery installed nearby. Besides  numerous  fragments,  carved temple relics, other evidence  of the site include stone pillar capitals, some with carvings, amalakas, door frame, doorsills and jambs, pedestals, horizontal lotus moulded architraves andangasekharas of temples. Figures of Ganas, dancing ganas and  floral designs are also to be found here.

The ruins indicate the existence of a Siva temple in the site. Its unique natural beauty, hilly topography and forest attract people and the site remains a place for recreation over the ages.