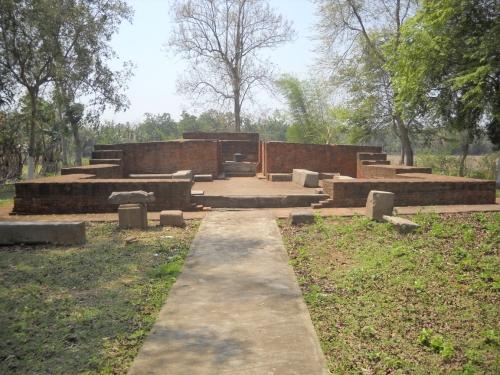 This is situated on an old water channel to the west of the Rajbari and Sankhya Devi Archaeological Sites. The site has eight brick temples divided in symmetrical plan facing each other in two lines.  The temple structures have components of stone pillar posts, bases, door jambs, doorsills, Siva linga and Yonipith.

This group of brick-built temples are unique in Assam for these structures have been found embellished with terracotta plaques laid horizontally on the outer face of the walls. The variety of representation includes diverse aspects of nature, figures of gods and goddesses, human and animal figures, floral designs, scenes from public life, religious life and other aspects -all carved to decorate the brick temple walls.

Such decorative arrangements in walls of temples as seen at Nath Archaeological Site recalls artistic development of temple architecture during the Gupta  period.  Judging by the style, these pieces of archaeological evidence at Na-Nath can be dated to c.800 CE. The eight brick built Siva temples with one at Kenduguri nearby make altogether nine temples for which the site is known as Na-Nath.